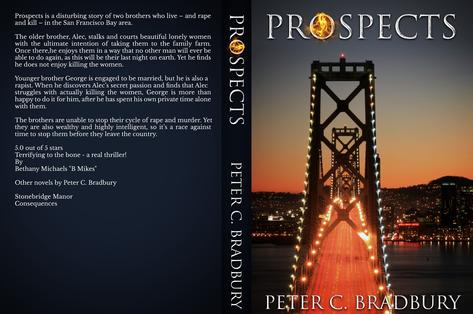 Prospects Is a disturbing story of two brothers who live in the San Francisco Bay Area. The elder of which is very handsome, tall, and wealthy. He attracts the most beautiful women, who he likes to stalk and court, and if they meet his criteria, he takes them to the family farm for a final night of passion.
When he's done, he leaves them to the whims of his less attractive brother, who was a suspected rapist, and the younger brother ultimately disposes of the victims. As both brothers are also extremely intelligent and careful, it's a race against time to find some evidence, before they skip the country.
Although Prospects is a riveting thriller / suspense novel, it highlights the very big problem of Missing People. Thousands of people go missing every year, literally falling off the face of the earth. It is of course every adult's right to disappear, and if no evidence is available to suggest that something untoward happened to them, then the police can and will, do little.
It used to be that you had to wait for 72 hours to report someone missing. Now, because it is a big problem, you can report it immediately.